Share
This is the third of a series of seminars anticipating the exhibition Indigenous Histories, to be held in 2023, year during which a namesake curatorial project will orient a whole program of solo and collective exhibitions, conferences, workshops, publications, and courses at MASP.

With the presence of theorists, artists, and curators from different places, scenes, and perspectives, the seminars also propose to present and discuss the richness and complexity of indigenous materials and immaterial cultures, as well as their philosophies and cosmologies, in addition to the challenges and possibilities of working within these fields, especially in a museum context.

LIVE TRANSMISSION
The seminar will be broadcast online and for free through the profile of MASP on YouTube, with simultaneous translation in the Brazilian sign language.

11am – 11:10am
INTRODUCTION
LILIA SCHWARCZ, cocurator of Histories, MASP

11:10am-12:40pm
ARIEL KUARAY ORTEGA
Cinema and the Guarani: Spirituality, Territories, and Borders
Among the Guarani, especially in the village where he lives, cinema has a political and spiritual importance nowadays. It is interesting to think about the meaning of cinema for the Guarani and what it has brought about for this people living a border situation, in between Brazil, Paraguay, and Argentina. Cinema is a tool allowing indigenous peoples to tell their own stories and ways of seeing the world. Indigenous cinema also had to transform this Western tool so that it could be accepted inside the villages. In dialogue with the community, these videos report the Guarani culture in its own terms and times. Although it is a universal language following certain rules, when entering a village, cinema starts to function according to the local rhythm, thus imposing a constant and productive confrontation of two worlds.

ROSAURA ANDAZABAL
The Project Cuentos Pintados del Perú [Painted Stories of Peru] and Its Contribution to an Intercultural and Bilingual Education
Created and directed since 1994 and until January 2020 by the Peruvian historian Pablo Macera, the project influenced the furtherance and development of an intercultural, bilingual education. A project that, over nearly three decades now, compiled several visual records that go hand in hand with the orality of migrant women and men of the Peruvian Andes and the Amazon, settled in the urban metropolis of Lima. A cultural heritage that was rendered tangible through publications (stories, catalogs, and calendars, among others, in both native and Spanish language), art exhibitions, ritual celebrations and traditional festivities, in addition to the participation in national and international cultural events. Works by popular artists that, as Pablo Macera himself used to say, “build a space of their own and, with certain limitations, obtain a fair acknowledgment in and outside of this Fourth World that operates within the Third World.”

CARLOS FAUSTO
The Face of God and That of the Jaguar: Indigenous Art Beyond Human
“And God said: – Let us make man in our image, after our likeness.” This notorious versicle is at the origin of an entire Western tradition of imagery, which has anthropomorphism and verisimilitude as its pillars. However, not all societies of this world have established the same surprising correspondence between the human and the divine. Native indigenous societies of the Americas, who bloomed off of Christian culture for some thirteen millennia, have not imagined or materialized deities in such a way. On the contrary, their arts sought to figure “divinities” through paradoxical images, forged in a vigorous zoomorphism and a merely latent anthropomorphism. In this presentation, I invite listeners to be surprised by their own artistic tradition and its anthropocentric premises by means of a journey through indigenous arts.
Moderator: Guilherme Giufrida, curatorial assistant, MASP


2pm-3:30pm
ABRAHAM CRUZVILLEGAS
Indigent Histories
Understanding “indigenous” as a political category, and not only cultural, and considering language as territory, as proposed by Yásnaya A. Gil, Abraham will speak about the current project of the Zapatista Army, the Universidad de la Tierra, through which they confirm the transformation into a cultural project of what was a military organization created by indigenous peoples of Chiapas to fight the Mexican state. He will refer to the P’urhépecha people of the town of Cherán, Michoacán, who – after suffering with the presence of drug cartels, the devastation of their environment, and the ensuing destruction of their economies, traditions, and culture – decided to organize “autodefensas” [self-defense fronts] so as to get rid of a corrupted environment and declare themselves autonomous from the federal state, thus recovering their traditional non-Western self-government system. His father’s family is also P’urhépecha from Nahuatzen, the closest town to Cherán, while his mother’s roots are Hñähñu. He is an artist wondering about the construction of the identity of the self in a non-linear, non-binary – but maybe trinitary or multiple, simultaneous – model or methodology: a contradictory and inefficient one.

SANDRA GAMARRA
Se me sale el indio
As an artist and anthropologist, or perhaps as an anthropologist artist, José María Arguedas is one of the most necessary and important voices of Peruvian culture. From his mestizo condition, he knew how to speak as an indigenous and as a westerner, understanding that miscegenation not as the dissolution of one culture into another, but rather as a complex, painful, and very particular coexistence, depending on the circumstances of each group. The tools he uses to navigate these waters are precisely the writing and a subversive anthropology. To speak of indigenous histories when the one speaking is not native, might seem as an usurpation of the voice and the imaginary of such peoples. Yet, following Arguedas, these parts live together, and taking the indigenous voice does not mean to make it mine, but quite the opposite, it serves to expose this friction and, therefore, its existence. In this scenario, singularity is no longer a feature, the artist starts to act as a mediator of the community, an agent expecting that the meaning of such forms might manifest in their usage.

SEBASTIÁN CALFUQUEO ALISTE
Bodies in Resistance / Iñche tá kangechi (I Am the Other)
The performance Bodies in Resistance / Iñche tá kangechi (I Am the Other) recompiles out of colonial accounts the different ways of denominating sodomy in Mapundungun, language of the Mapuche people. In the mise-en-scène of the performance, the artist analyzes colonization and evangelization as practices of normalization and extermination of non-heterosexual identities present before the European colonial process. The work approaches the body, resistance, the blue color, sound, as well as the meaning of hair within the Mapuche cosmovision, stressing the colonial gender imaginaries constructed by the Western culture. The hood used in the action bears the image of Guñelve, a star representing Venus or the bright star of dawn, a symbol of the Mapuche resistance.

CARLOS FAUSTO
Professor at the Museu Nacional of UFRJ, researcher at CNPq, and Global Scholar at Princeton University. He is the author of Inimigos Fiéis: História, Guerra e Xamanismo na Amazônia (2001), and Art Effects: Agency, Image and Ritual in Amazonia (2020), among others. He is also a photographer and documentarian, and codirected the film As Hiper Mulheres (2011).

ROSAURA ANDAZABAL
Holder of a bachelor’s degree and a graduation in History and Social Sciences from Universidad Nacional Federico Villarreal, as well as of a Master’s degree in History from Pontificia Universidad Católica del Perú. Since 1985, she works as a permanent researcher at ISHRA, where she actively takes part in several projects. Her studies approach the socioeconomic history of Peru and Latin America between the 16th and 18th centuries, Peruvian art, in addition to the intercultural and bilingual education in the Peruvian Andes. She has published several books and articles under the ISHRA and other national and international institutions. Since 1990, she is the coordinator of the Andean department of the project Cuentos Pintados del Perú.

SANDRA GAMARRA
Graduate in Fine Arts from Universidad Católica del Perú. In 2002, she created the LiMac, a true/false museum in response to the institutional void in Peru. With a collection initially composed of souvenirs – erasers, pencils, yo-yos –, Gamarra will further develop it with her painted appropriations, in addition to the architectural project of an invisible building under the Lima desert. In constant camouflage and hybridization, the recurring use of painting in Gamarra’s work acts as a mirror that alters exhibition formats, their accounts, and the very property of culture.

SEBASTIÁN CALFUQUEO ALISTE
Visual Arts PhD graduate from Universidad de Chile. Part of the feminist Mapuche collective Rangiñtulewfü. Represented by Patricia Ready Gallery. Of Mapuche origin, their work appeals to their cultural inheritance in order to propose a critical reflection on the social, cultural, and political status of the Mapuche subject in the contemporary Chilean and Latin American societies. Their work includes installation, ceramics, performance, and video art in order to explore the cultural similarities and differences, as well as the stereotypes produced from the crossing between indigenous and western ways of thinking. 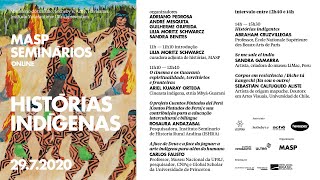 This is the third of a series of seminars anticipating the exhibition Indigenous Histories, to be held in 2023, year during which a namesake curatorial project will orient a whole program of solo and collective exhibitions, conferences, workshops, publications, and courses at MASP.