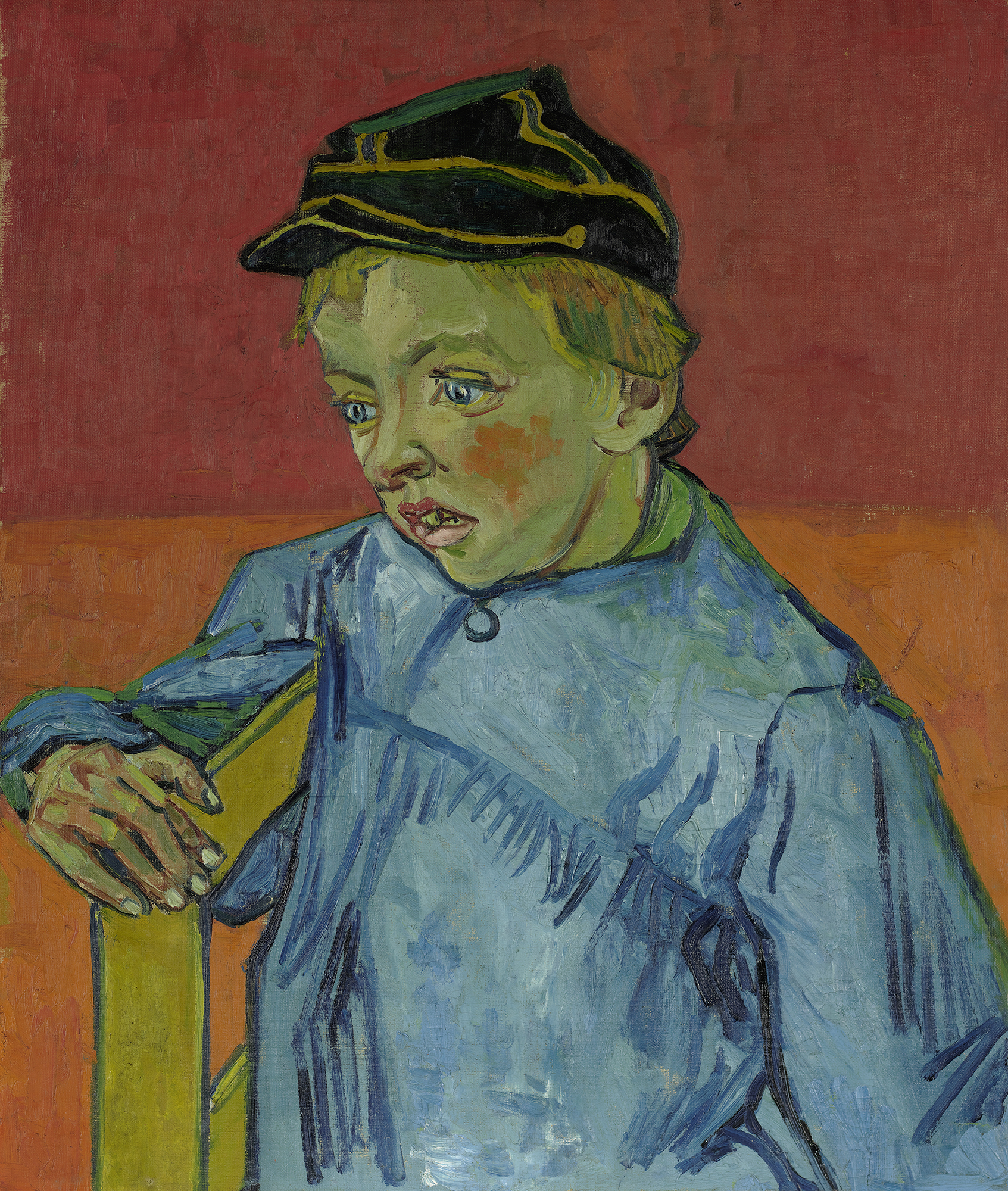 Van Gogh acquired an interest in painting while working for the art dealer Goupi, in the Netherlands and in London. He later dedicated himself to a religious career among the poor miners of Belgium, until being sent away for supporting the struggles of the workers. There, he began to paint and produced his first notable work, The Potato Eaters (1885). The following year, in Paris, he began to study impressionist technique and Japanese prints. He then moved to Arles, in the south of France, where he began a series of works with splendid lighting and vibrant colors. In this period, he suffered psychic disturbances and compulsory internments in asylums, which culminated in his suicide in 1890. His letters are fundamental documents for the understanding of his work, especially those addressed to his brother, Theo van Gogh (1857-1891). Study of the artist’s letters shows that model for The Schoolboy (The Postman’s Son — Gamin au Képi) (1888) is Camille, the son of postman Joseph Roulin. Various members of the Roulin family posed for Van Gogh in Arles. The same yellow-and-red background was used in other works from this phase, including his self-portraits. The vibrant and saturated colors make the brushstrokes more evident.

By Luciano Migliaccio
Scherjon and De Gruyter dated the painting The Schoolboy (The Postman’s Son – Gamin au Képi) 1890 and related it to a letter Van Gogh wrote from Saint-Rémy to his brother Theo on January 4th, 1890 (n. 622). In this letter, Van Gogh mentioned a small portrait of an asylum attendant, which he wanted to send to his mother. Lecaldano, Müller, and other authors are in agreement on this date. Camesasca identified the model as Camille, the son of postman Joseph Roulin. The members of the Roulin family were Van Gogh’s favorite models during his stay at Arles. Accordingly, this canvas is probably dated between November and December 1888, when the painter wrote to his brother Theo: “I painted portraits of the postman’s entire family... the man, his wife, baby, boy, 16-year-old son, all of them very characteristic-looking and very French, despite the first looking Russian.” Camesasca also noted that the background divided in two stripes, one yellow and one red, appears inverted only in his Self-Portrait with Bandaged Ear and Pipe, which is definitely dated January 1889 (Chicago, private collection). Pickvance (1984), who also believes the painting to be dated 1888, suggests that the difference between the technique used in this picture and that in other paintings produced at that same time was caused by the model’s inability to hold still.